This actor and comedian will be missed for a very long time. Anyone who had caught his act or watched his movies knew there was some kind of genius lurking there. He was manically funny and his dramatic performances were near perfect. He won an Oscar for his supporting role in Good Will Hunting (1997); and, he had 83 nominations from various film industries and 63 wins. Whether drama or comedy, he sublimely did it all. The ancient Greeks would have considered him the consummate performer, like Buster Keaton. They are a combination of hilarious laughter and heartbreaking tears; or, as the Greeks considered it, an illusion of perfection within the arts of entertainment.  You only had to see Williams once, regardless where; and, he made an impression that you would not easily forget.

His improvisations were pure magic. As with most performing artists, many aspects of his personal life would make it into his act. For instance, he was very proud of his Scot heritage. You can see some of this in the following video clip. In this clip, he is impersonating a “pissed” (into his cups, smashed, drunk…) Scot. This particular Williams character ended up inventing the game of golf. Take a look, if you have not seen it or if you want to laugh again. This displays Williams’ trademark of energetic impersonations along with the hilarity of his wit.

Before I continue, I would like to thank Gill from Realweegiemidget and Crystal from In The Days of Classic Hollywood for hosting this much deserved tribute: Robin Williams Blogathon. To read or see more of this tribute, please use the following links:

The first fleeting impression I had of Williams was from TVs reboot of Rowan and Martin’s Laugh In (1977).  Williams was mixed in a fast paced kaleidoscope of comedians doing their gags and short skits. However, he stood out even then. He was young, handsome, and wearing a funny-looking cowboy hat. He wowed me in only a few seconds. Anyone who saw him knew he was different and unique. I tried to catch the show the following week. Either, I missed it; or, it just didn’t never aired.

I don’t think I saw him again until the highly popular Mork and Mindy (1978 – 1982). He was not a cowboy this time. No, he was a cute, funny-looking space alien who is befriended by the pretty Mindy (Pam Dawber). For those who don’t remember it, this show is a cross between My Favorite Martian (1999) and the Earth Girls Are Easy (1989). For most of us, it was the first time we heard the words: Nano, Nano! Who knew then that “Nano” technology would be in our future?

Williams claims he was heavily influenced by many great performers and actors. However, I think his greatest influence came from comedic icon and the first inductee to the Comedic Hall of Fame: Jonathan Winters. If you seen Winters act when dressed as a women, you might think: this is Mrs. Doubtfire’s American cousin: Maude Frickert. If you never seen Winters impersonation of the 87 year old Maude, then I encourage you to watch the following short clip of “her” with Dean Martin. They are setting up a commercial for a sponsor of The Dean Martin Show in what they call a “station break.”

The jokes are a bit dated and sexist; but, it was “naughty” fun for audiences of the early 60s.  The similarities between the two crossdressing elderly, spitfire-characters cannot not be missed. Both are immensely enjoyed by their adorning fans. 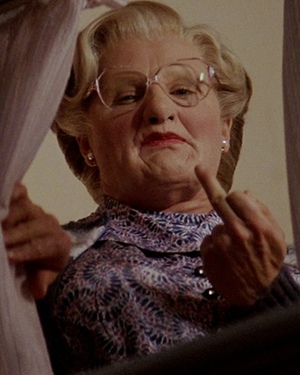 After Mork and Mindy were married, they soon announced a baby on the way. Their half Alien/human newborn would be “hatched” into a baby named Mearth (Jonathan Winters). Due to Williams admiration of Winters, this should not have surprised people; but, it did. You had to watch it to understand how ridiculously funny those last few years were on that show with this comic marriage.  Those two together, Williams and Winters, was akin to a comedic molotov cocktail. 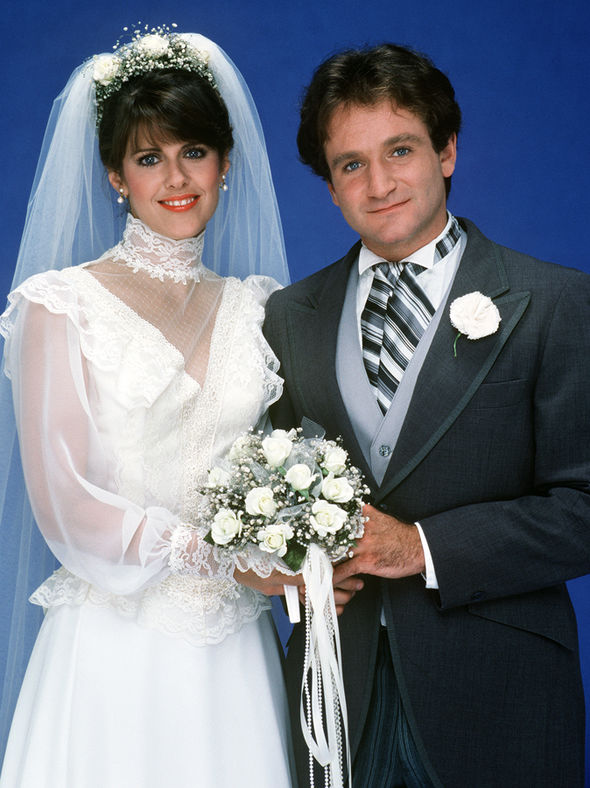 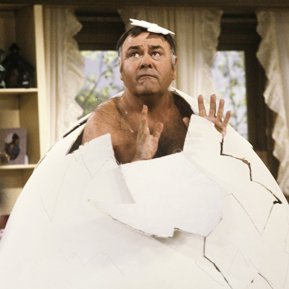 Here is a clip of them ten years later after the show ended. They are on the Johnny Carson Show. Carson had alreadied interviewed Williams before they brought out Winters.  Winters had just won an Emmy for another TV show; however, he did not attend the awards to receive it. Williams was obviously elated to be there with the iconic funnyman.  This clip is just a glimpse of what it must have been like with these two geniuses working together. Their respect and admiration for each other can be seen through the details.

In addition to Winters, Robin Williams credits others whose influence had an major impact on him, especially, when it came to acting. He loved watching British actor, Peter Sellers (Pink Panther, Doctor Strangelove or how I Stopped worrying and love the Bomb) and Dustin Hoffman (Tootie, Hook).  They each impressed upon him the need of learned, practiced characterization.  Each character, no matter how large or small the part, deserved serious study.  Hoffman taught Williams this during the making of Hook: Preparation is key to a great performance. This advice must of become extremely important to the “The King of Improvisation.”

Williams will be involved in 105 film productions. Most, if not all, delivered a character, good or evil, with a degrees of heart and humanity.

The first time one of Williams’ performances surprised me was in Kenneth Branagh’s Dead Again (1991). This is a wonderful movie that salutes the styles of Alfred Hitchcock and Orson Wells. With that said, this movie has passion, murder, mystery and the possibility of reincarnation. It travels from post WWII in the United States (filmed in black and white) to the present (filmed in color). In the past, Branagh is German composer Roman Strauss. He marries a much younger musician, Margaret (Emma Thompson). She is murdered and Strauss is executed for the crime. In the present, Branagh is cynical private eye, Mike Church. Most of his work comes from tracking down missing heirs.

A lawyer contacts Church to locate a professionally ruined psychiatrist, Cozy Carlisle (Robin Williams). What a great name for a psychiatrist, Cozy. Apparently, that was his problem. He got too “ cozy” with his patients. Church locates him working in a grocery store’s freezer locker.

Church is called by his priest to come back to the orphanage (converted Strauss mansion) where he was raised. They have an female amnesiac who just appeared at their gates. Unfortunately, she is so traumatized, she is mute too. As if that is not enough, she has nothing on her to identify her. Church really doesn’t want to deal with this kind of case; but, his priest knows how to guilt him out. Once Mike meets this woman, he is immediately intrigued. He gives her a temporary name, Grace (Thompson).

Eventually, Mike ends up taking her to hypnotist, Franklyn Madson (Derek Jacobi) who also has a antique shop. Church and Grace learn of the Strauss murder under hypnosis. While in the hypnotic state, Grace appears to relive her past life as Margaret Strauss, (the murder victim). As a result, Grace finds her voice but not her memory of her life in the present. Church’s instincts tells him not to trust Madson.  Instead, he and Grace pay a visit to the bitter and angry, ex-doctor, Cozy Carlisle. Church wants his advice about the possibility of reincarnation.  The following two clips completely contain this conversation. Until this movie, I never seen Williams in such a dark role. It was brilliant, of course.

Even as this darker character, Cozy Carlisle, Williams delivers a punch line to Branagh’s Mike Church. I liked how this movie explores other beliefs. Although the answers differ by various religions, the questions remain the same (why we are here; or, what is our place in the greater scheme of things). The answers will always be debated; but, even with confusing answers, the questions are always pursued and are infinitely more interesting.

The following year Williams passed away, a very dark movie (his last) was released, Boulevard (2015). I was saddened that such lovely person as Robin Williams is not here anymore to make us laugh. No, I didn’t see it, nor at that time, did I want too.  However, time soften the heart; and, I decided I want to see it. I want to be fair in honoring all of Williams’ work.

For a while, I wanted to remembered the smiling and gifted performer in happier movies. A few years, after he passed away, Americans in the United States were given the “another” last movie with Robin Williams. It was released in the U.K. in 2015 but not in the States.  It is a scientific comedy…Yessss: Absolutely Anything. Williams does the voiceover for the dog, Dennis. The trailer looks funny; and, I am looking forward to watching it.

It is directed by Terry Jones (Monty Python) and it is written by Jones and Gavin Scott. I took the liberty of copying the cast lists from Wikapedia. Here is the link:

Feast your eyes on all of this talent.  As far as the voiceover cast, you might as well call it “Monty Python” with Robin Williams.

John Cleese as Chief Alien
Terry Gilliam as Nasty Alien
Eric Idle as Salubrious Gat
Terry Jones as Scientist Alien
Michael Palin as Kindly Alien
Robin Williams as Voice of Dennis the Dog
Again, I have not seen this movie; but, I guarantee you that I will by this weekend; even though, the movie received lukewarm reviews.  That’s nothing new. Most comedies receive lukewarm reviews; or, they are totally trashed. It just makes me happy that Williams, in the voice of “man’s friend,” comes from this space age comedy to make us smile, again.  Let me know in the comments if you seen it and if you enjoyed it. 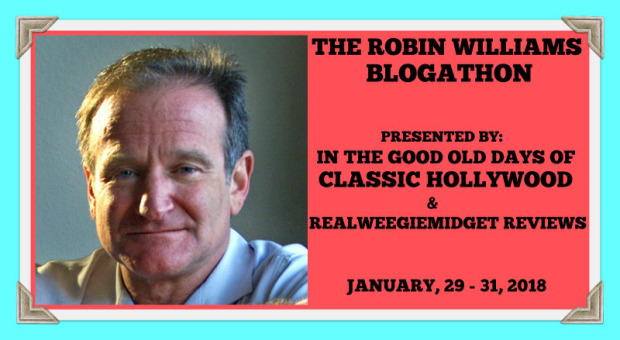 Again, that you Gill and Crystal for hosting the Robin Williams Blogathon.  Don’t forget to see more tributes to Robin Williams using the following links:

This is a text widget. The Text Widget allows you to add text or HTML to your sidebar. You can use a text widget to display text, links, images, HTML, or a combination of these. Edit them in the Widget section of the Customizer.
Join 682 other followers

This is a text widget. The Text Widget allows you to add text or HTML to your sidebar. You can use a text widget to display text, links, images, HTML, or a combination of these. Edit them in the Widget section of the Customizer.
Loading Comments...
%d bloggers like this: