Seriously, why would Billionaire Bruce Wayne ever need to put on the Batman suit if it wasn’t for the flavor of the week, villain?  Of course, he could wear it for Halloween or to attend a ComicCon convention, or even if he is a bit kinky in the bedroom.  But let’s face it, without a villain, a big part of who Wayne is would fade away.  The Batman would retire and not be needed anymore. He would probably end up as a CEO of various corporations worrying about profit margins and his trophy wife’s spending budget. The fact is that day agendas of the superrich is not as exciting as stopping a maniac from destroying the world.  The spice of life is making the world a better place for everyone and all living creatures. Simply, in the world of the arts, we need villains; so, men and women can become heroes.

One of my favorite Batman (1966 -1968) villains is Vincent Price as the Egghead.  To me, Price is the ultimate Villain.  He has great screen present with that low menacing voice and an evil laugh to die for. According to many actors, playing a villain is a lot of fun.  I used to laugh at how Egghead loved to pronounce words that started with “ex” as egg.  Like the word, excellent would be pronounced egg-cellent or egg-actly for exactly.  There is a humorous story about Price on the Batman set. He actually started an egg fight with the other actors and crew.  Price must have been a lot of fun to work with.  I often wondered if they cast him as Egghead because he was a was an actual gourmet chef, besides being an remarkable actor. Sometimes, villains can resemble other villains too.  Don’t you think Tom Hardy’s Bad boy Bronson looks a little like Egghead in these pictures?

Now that I have established the need for villains, on to the next questions: How is a villain defined; and, what is an example of a great villain? To find a working definition, I used the meaning of the word, nemesis.  In Greek mythology, Nemesis is the Greek goddess of indignation against undeserved good fortune. She is the goddess of fairness and a balanced proportion of reward.  In other words, she is the goddess of “sour grapes” and “that’s not fair” emotions.  This is the basic ingredient to the making of a villain.  It is also something that all humans have experienced, to some degree.

So, I believe it is safe to say that there must be a little villain in all of us.  You probably heard the Native American story of two dogs fighting within the soul of every man.  One is evil and the other is good. The kind of man you are depends on which dog wins the fight: one is a hero and the other is a villain.

Maybe this is why we have such guilty pleasure while watching our favorite villain on film.  The elements of a great villain is purely conjecture. However, I believe they must share similar characteristics with the hero.  Usually, they have:

My favorite film villains are on a long list.  However, as I mentioned before, Vincent Price is at the top.  Price appeared in over 100 movies and has over 200 film credits to his name. They range from documentaries to voice overs. His voice overs include Saturday Morning cartoons, Scooby-Doo and the Thirteen Ghosts (1985);  animated Disney movie, The Great Mouse Detective (1986) and Tim Burton’s short Vincent (1982). This also includes work in the music industry.  For instance, his voice was recorded on rocker Alice Cooper’s Welcome To My Nightmare album and in pop star Michael Jackson’s Thriller (1982). 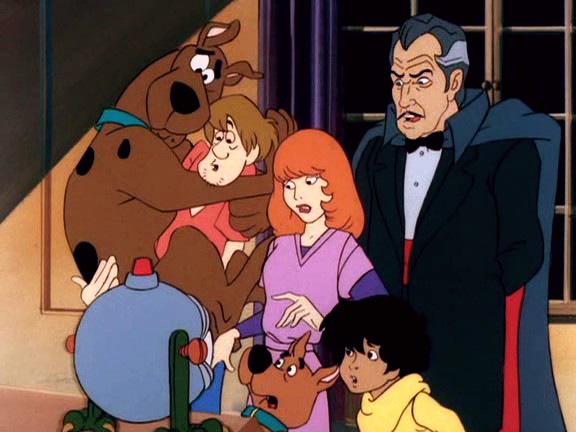 When it comes to film acting,  he is in superb company with the likes of Sir Christopher Lee and Peter Cushing.  As a matter of fact, all three of them appeared in two horror movies together: Scream and Scream Again (1970) and House of Long Shadows (1983). Lee and Price were in a total of 4 films together and shared the same birthday, May 27th.  Price is ten years senior to Lee. Crushing’s birthday was May 26th and was 2 years younger than Price. 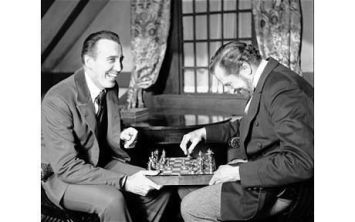 With a film career that spanned over 50 years, there are many great movies starring the villainous Price. To choose only one as a favorite is near impossible. However, there is one movie that I thought went beyond the pale in regards to horror movies. I first saw it in the 80s even though it came out in 1971: The Abominable Dr. Phibes. 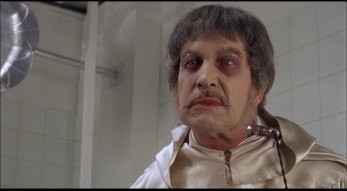 This movie is described as a comedy-horror movie.  I did laugh quite often watching it, as well as being shocked and “grossed out…”   Yes, it truly was a lot of fun. The movie begins with a hooded dark figure who is playing a console organ on a platform with a red curtain background.  After all the credits roll by, the hooded figure finishes his song and steps off the platform onto a ballroom floor.

There are some doll-like figures with various musical instruments in their hands.  He (Phibes) places coin in a slot and turns a crank. They start to play their instruments while he begins to lead the small orchestra into playing a beautiful melody.  Then, a door opens and a gorgeous exotic women (Virginia North) sauntered down the steps. She approaches the conductor (Price); and, they begin to waltz around the room as the orchestra of robot dolls continues to play.

Once this new tune stops, the lady leaves.  The hooded figure lowers a covered bird-cage through a hole in the ballroom floor.  On the lower level is a car garage.  We see a fashionably dress lady receiving the cage.  As she places it in a car, the dark hooded man takes a seat in the back of the car. 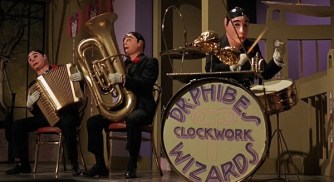 In the next scene, an elderly gentleman is reading a newspaper in bed. His apartment is lavishly furnished.  Once he is asleep, we see a ceiling skylight window being slowly opened.  Gloved hands are gently lowering the covered bird-cage into his room. A few minutes later, the empty cage and its cover is pulled up by the same rope that lowered it into the room. The sleeping gentleman is awaken by an odd scratchy, sucky noise.  Soon, we see him being attacked by bats. The man is bitten to death by hundreds of bats in his London flat.

When Scotland Yard shows up, they are completely shocked and puzzled by the bats in his room and with the manner of his death. As inspector Trout (Peter Jeffery) says it: He was shredded to death.  Right here in the heart of London. Tom, the other inspector, remarks that it is the second strange death of a doctor in a week.  The other doctor/victim was discovered with boils all over his body made from Bee stings.  Inspector Trout asks: Bees in his Library? 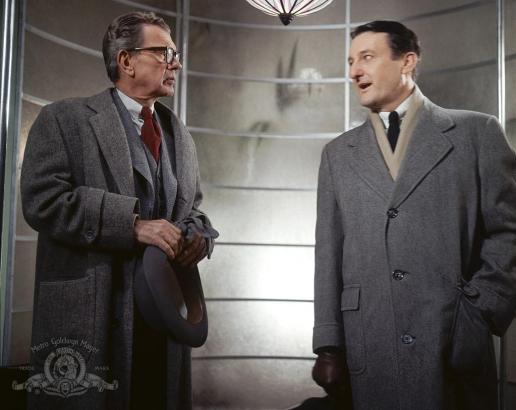 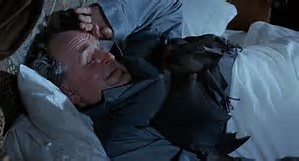 So, 34 minutes into the movie, we have 4 doctors murdered in bizarre ways; and, Dr. Phibes has not uttered the first word; but, his music is great.  During another murder, a clue is found by the inspectors.  A necklace with a Hebrew symbol etched on an emblem was accidentally dropped at one of the crime scenes. It symbolized one of the ten curses/ plagues that God delivered to a pharaoh of ancient Egypt.  Which is kind of funny because Vincent Price played a baddie working for the same pharaoh in The Ten Commandments (1956) with Charlton Heston. 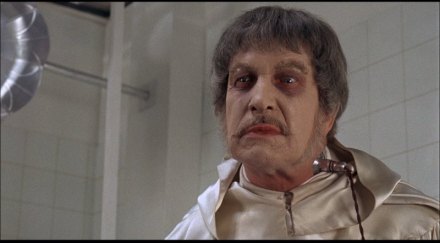 The inspectors are told by Dr. Vesalius, Joseph Cotton, that he found the connection to all murdered doctors, which included himself.  We learn that nine doctors had the same patient; Victoria Phibes; and, she died six minutes into surgery. Her husband, Dr. Phibes, raced to the hospital to be by her side; but, had a car accident.  His car plummets over a cliff, catches fire and blows up. Vesailus was the head surgeon.

Did he really die in that accident? Was that Dr. Phibes body in the coffin?  Or, was it someone else? It has been suggested that this is a spoof about avenging oneself against the medical industry.  In light of the medical profession today, I can understand the analogy.  Just a note, this is not the first time Price and Cotton were in the same movie. Cotton starred in Laura (1944) along with costar Price.

Without spoiling the ending for those who have not seen this film, I really urge you to watch this 70s movie classic.  Yes, it is dated; and, yes, the graphics may look silly compared to today’s films made with CGI and green screens; however, it is still a fun experience to watch and when it is all said and done, that is all that matters anyway.

This post is part of The Great Villain Blogathon 2017.   Please read about more film Villains using the following links.  Many thanks to the three blog sites who hosted The Great Villain  Blogathan 2017: Shadows and Satin, Sliver Screenings and Speakeasy.

I do not own any of these images

21 thoughts on “Where Would We Be Without Villains? The Great Villain Blogaton 2017”

This is a text widget. The Text Widget allows you to add text or HTML to your sidebar. You can use a text widget to display text, links, images, HTML, or a combination of these. Edit them in the Widget section of the Customizer.
%d bloggers like this: