The Colours Blogathon is hosted by Catherine from Thoughts of All Sorts. The movies reviewed in this blogathon must have a color adjective as part of the title.  I chose black since it encompasses all the colors on a color spectrum (complete adsorption of light without reflecting any rays). To match a “black titled” movie, I wanted to review a great movie that has a multilevel of emotions and actions.  So my favorite movie with these requisites is Black Hawk Down.  As far as war movies goes, this movie is one of the best. It is directed by Ridley Scott (Alien, Gladiator, Thelma and Louise…) and produced by Jerry Buckheimer (Pirates of the Caribbean, 2003, 2006, 2007, 2011, 2017; Top Gunn (2017); Geostrom (2017) ….

It has an all-star cast from around the globe.  However, none of the actors are from Somalia. Just take a look at the list of these actors who play crucial roles in this film: 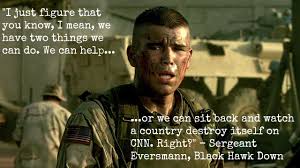 If I were to name “a lead star,” it would have to be Josh Hartnett (Eversmann).  This war movie presents each soldier (actor) in equal measure because that is how  real teams of soldiers operates: everyman matters and no one gets left behind.  They each have a job to do; and, they must watch each other’s back in order to survive and make it out alive.  All the courage, fear, and frustration to accomplish this is vividly felt throughout the movie. Realistic and gritty are just two words to describe this engrossing film.

It is based on a book by journalist Mark Bowden, Black Hawk Down: A Story of Modern Warfare (1999). The book is based on an incident that happened on October 3, 1993.  Bowden wrote 29 articles for the Philadelphia Inquirer researching and interviewing soldiers who were involved in this combat.

In 1991, after the overthrow of Somali dictator, Siad Barre,  civil war broke out between different clans.  These clans arbitrarily attacked civilians and committed war crimes.  These attacks interrupted food production which resulted in a famine.  Across the globe, the news displayed disturbing images of starving people, some were babies.  By 1992, the Bush administration launched “Operation Restore Hope.” The United States in joint effort with the United Nations sent troops to Somali to “destabilize the government and bring food and humanitarian aid to a starving population.”

Warlords of the rival clans intercepted the food supplies sent from other countries to feed this starving population. They distributed the food to their ever-growing armies first. Then, they sold what was left. Essentially, there is no government. At some point, demonstrations of protest began.  When Pakistani soldiers, as part of the U.N. mission, fired into a crowd of protesters, Warlord, Aidid, counter attacked  and killed 24 soldiers. At this point, the U.N. Security Council authorized “All necessary measures to apprehend those responsible.” A $25,000 bounty was placed on Aidid’s head and a manhunt began.

By October 3rd 1993, U.S. Special forces were sent to the capital, Mogadishu on a mission to capture a key lieutenants of Aidid. Using U-H-60 Black Hawk helicopters, soldiers were lowered to the ground. Once the rebel “targets” were captured, the soldiers soon learned leaving the city became near impossible due to multiple road blocks and being under constant fire.

Just as this Snafu began, an unexpected attack by Somalian forces brought two helicopters down using RPGs (Rocket Propelled Grenades).  Mobs hacked the fallen pilots to death with machetes and dragged their bodies through the streets as trophies. One pilot was captured and was released weeks later. Humvees were used to transport the dead, wounded, and any soldiers they could fit into their vehicles in order to escape the thousands of Somali militia surrounding them.  Many had to be left behind; until, another rescue effort could be made.

Even with air support to direct them out of the city, Humvees found only blockades with militia shooting guns and mortar grenades at them. What should have taken only a few hours ended up taking 15 hours. This is known as the Battle of Mogadishu and it lasted for two days. The route that was “run” by the Army Rangers and Delta Force soldiers from the helicopter crash site to the rally point is known as The Mogadishu Mile. Some of the Rangers were forced to run on foot behind the rescue convoy of Humvees leaving the city.  Each Humvee was packed with dead, dying and/or wounded soldiers. The soldiers who had to run on foot did this unprotected and were still in constant harms way.  This incident is an extremely moving segment of the movie as they run to safety.

The Movie and a few facts:

Although this movie is an excellent film, be warned there are graphic shots and violence because of the nature of the story. There is also a great deal of colorful language and some dark humor. These are typical behaviors for most men and women who work within severely stressful conditions.  However, there is no nudity for those of you who are screamish about people in the buff. If you have not seen this truly great movie, just know that it is a compelling story that will keep you on the edge of your seat.  In addition to being a bit anxious, there will be times that you will probably laugh and tear up too.

There has been much written about this film and this battle.  So, I will mention a few things that I noticed while I watched it.

Since all soldiers have similar hair cut and uniforms, the director had each character’s last name printed on the helmets; so, you could tell them apart. Printing names on helmets is not done in the “real” U.S. Army. 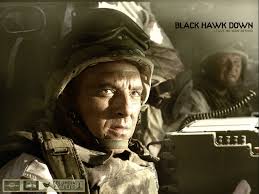 The scenes with Major General Garrison (Sam Shepard) in the control room had actual Satellite images of the real battles.  Also some of the radio chatter between the Humvees, helicopters, and command was taken from actual radio transmissions made during the Battle. 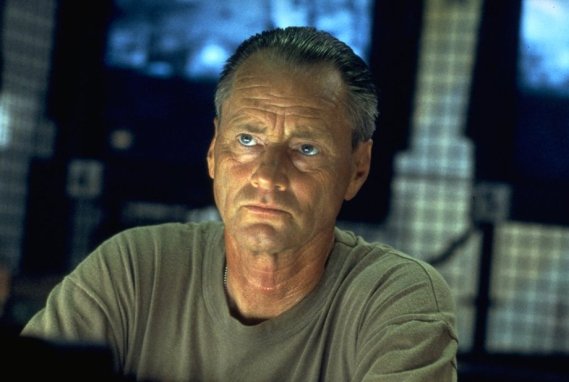 Regrettably, the film Black Hawk Down did not show the role of Malaysia and Pakistan Forces in Somalia. When U.S. troops were trapped in the center of Mogadishu, it was the Seventh Frontier Force Regiment of the Pakistan Army that went in to help them get out. When it is all said and done, at least 18 American soldiers were killed and thousands of Somali were killed.  President Clinton pulled U.S. military Forces out of the country. He justified the thousands killed with this statement:

When people kill us, they should be killed in great numbers.

As a result of U.S. forces pulling out, Somali is still a war-torn country and Mogadishu is still one of the most dangerous cities in the world: a hotbed of insurgents and a hide out for terrorists. But, controversially many considered this a failed mission. This film pays tribute to the spirit of those brave young men who went into a country and culture that they knew next to nothing about and risked and loss their lives. They followed orders and remained courageous and loyal to each of their brothers in arms.

To read more posts in the colours Blogathon, please use the link below: