Character actors do not usually star as the lead in a movie; however, their supporting performance is still vital to the success of a film.  Their roles varies with unique personalities that are often found to be eccentric, quirky, villainous, or just plain interesting.  Whatever the role, you can be sure that an excellent character actor will enhance the plot of the story and the film as a whole.  As a matter of fact, many of them have a tenancy to steal the scene.

In my last post, I examined a few acting techniques by character actor, Agnes Moorehead.  I felt her techniques helped her to create powerful performances. Obviously, she is one of my favorite actresses; but, there are others. Some of my more current favorites would have to include Robert Duvall, Kathy Bates, Stanley Tucci,  Gena Rowlands, and Paul Giamatti and the list goes on. Character actors are that rare breed that you can usually depend on to give an outstanding performance even if the movie or show is a stinker.  At the top of my list for favorite character actors would have to be Dame Margaret Rutherford (May 11, 1896 – May 22, 1972). 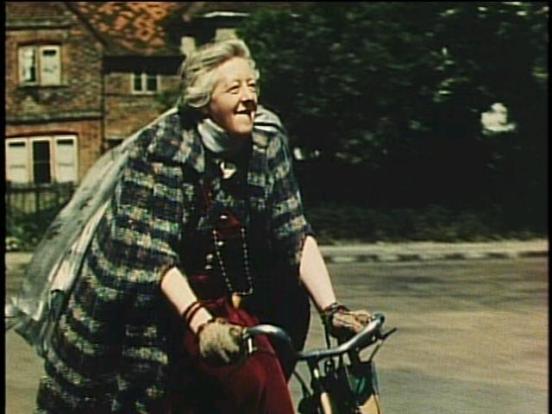 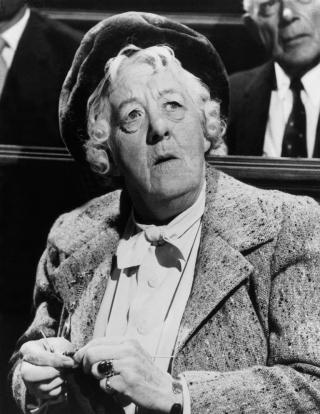 The first movie I saw this colorful actress in was Murder, She Said (1961).  She played Agatha Christie’s super sleuth, Miss Marple.  At the time she made this movie, she was 70 years old. This movie was the first of four films by director George Pollack based on Agatha Christie’s sweet, elderly amateur detective with Rutherford as the bold and eccentric Miss Marple . 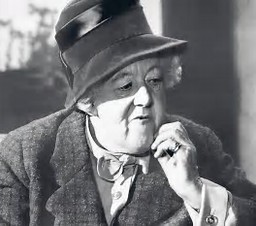 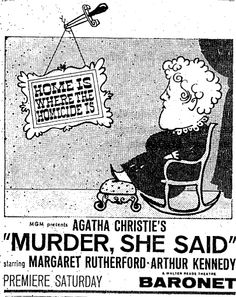 The film was based on a 1957 novel by Christie, 4:50 From Paddington. In the books, Miss Marple is a serious, soft-spoken, and a well-mannered spinster of independent means. In appearance, she is of small stature. Rutherford isn’t anything like Christie’s image of her beloved character.  As a matter of fact, Christie hated all four movies. 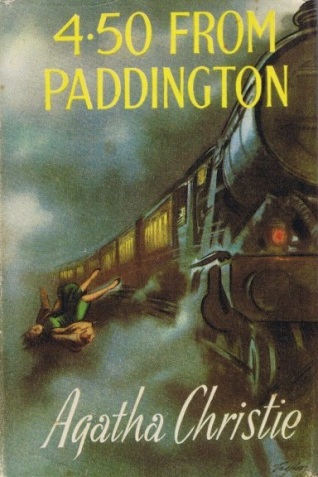 Book that movie Murder, She Said is based on

An interesting note, Christie’s first pick to play her beloved Miss Marple was actress Joan Hickson.  Hickson actually had a small part in this movie as a maid. Years earlier, Christie seen her in a stage play of another of her novels, Appointment With Death. She sent her a note: I hope one day you will play my dear Miss Marple.  And of course, she will, superbly, in the BBC adaption of all the original Miss Marple novels in the 90s.

Unlike Miss Marple of the books, who is genteel and prim in every way, Rutherford’s Miss Marple has the energy of a steam roller and almost the size of one too, with a witty, sharp tongue. I much prefer Rutherford’s interpretation of the character; and, it would appear Agatha Christie admired her as an actress too, despite the fact she loathe the films. 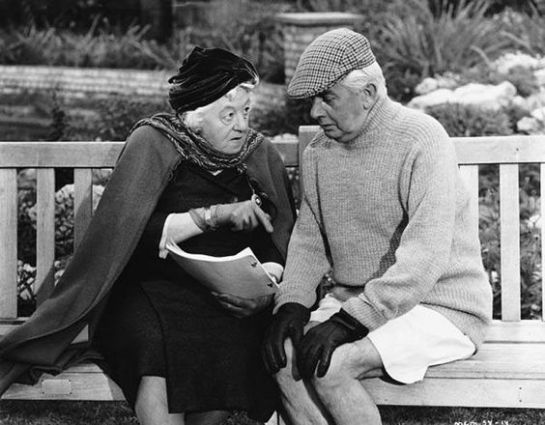 In 1962, Christie dedicated her novel, The Mirror Crack’d On Both Sides, to Rutherford “in admiration.”  That speaks volumes for Rutherford’s ingenious portrayal of the indomitable Miss Marple, especially in view of the fact how much the author acknowledged she hated the movies. Miss Hicks final performance as Miss Marple was the based on this particular book in 1992.

To appreciate Rutherford’s portrayal of Miss Marple, you need only view the first ten minutes of this movie.  Of course it goes without saying, you will want to finish it too.  Murder, She Said begins with Miss Marple moving quickly through Paddington train station.  As she walks, upbeat 60s music plays in the background. While watching her, I was thought of Paddington the Bear. I think it was because of her hat and the fact she was at Paddington station.  I learned that Rutherford worn her own personal clothes in the movie. I wonder if this helped her to get into “the skin” of her character.

As she walks through the station, she has a porter following her with her bags. She stops at a newspaper stand and quickly buys a paperback novel.  Once on board the train and in her compartment, she settles in her seat and puts on her reading glasses. She opens her recently purchase paperback book ominously titled, Death Has Windows.

In the next scene, we see her relaxed hands barely holding on to her recently purchased book, her head resting back, and her eyes shut. Suddenly, a loud passing train abruptly awakens her. Nearing the destination station, the trains are slowing down as they pass each other. As she looks out her window, she watches the people in the slower moving train. She sees a man attempting to eat his sandwich which he quickly puts down when he sees her watching him. Then, she sees a little girl looking out the window in the next compartment.  When the little girl sees her, she sticks out her tongue. Our not so prim Miss Marple sticks her tongue out too. That’s when I fell in love with the Rutherford’s Miss Marple. I doubt the book Miss Marple would ever react so child like and ornery.

After that humorous scene, we now see a different compartment with the blinds down. As Miss Marple is still looking out her window, the blinds suddenly fly up, revealing the back of a man with gloved hands wrapped around a woman’s throat.  She is fighting for her life; but, cannot break his hold around her neck.  Miss Marple frantically watches as he chokes the life out the beautiful blonde woman.  Miss Marple reports the murder to the train conductor who enters her compartment to checks her ticket. The ticket conductor is hesitate to report a murder. He sees an Miss Marple as an old maid, waking up after reading a murder mystery, titled Death has Windows, and dreams she saw a murder.  He suggests this to her; but,  she insists she knows what she saw; and he had better report it.

Next, we see Miss Marple in her own comfortable home. We observe a tidy house except for several newspapers scattered about. Inspector Craddock pays her visit concerning the report.  She offers him to set down where he proceeds to sit on her knitting needles. He painfully, explains that they could not find a woman at the train station or hospitals that matched her description. Miss Marple reminded him that she was dead.  He replied a through search was made along the whole track line and no body was found. She realizes that the inspector does not believe her. She informs him that she may be a spinster; but, she is not a dotty old maid.

She puts on her cape coat and picks up a stack of books.  She marches to her bike and feverishly rides to the library to speak to her librarian friend, Mr. Stringer. Mr Stringer ( Stringer Davis) is not in the books.  Rutherford demanded that her real husband play the added part of Miss Marple’s special companion. I love that Rutherford gave Miss Marple this buddy friendship.  It made her more earthy and urbane. Their friendship is a joy to watch as she explains to him what they must do.  They are adorable and almost child like in their planning.

The plan is to search the grounds around the tracks for the body or for clues to where the body was thrown.  Although, Mr Stringer is against the idea considering they are trespassing and it is very dangerous, he does as Miss Marple directs, like all good friends do. After Mr Stringer is nearly hit by a train, Miss Marple finds a clue. Lodged between the stones, she discovers a piece of torn fur from the collar of the coat of the victim. She deduced that the body must have been dragged over the wall.

She decides that she wants to see the estate behind the wall. My Stringer tries to hoist her over the wall. He clumsily helps her to the top but not over it. As she looks from the top to the other side, she sees a man with gun and dog. She decides to change the plan. She finds the address to the estate and becomes an employed as a maid for a referral agency. She requests to work at the estate where she soon learns they have quite a turnover for help. This is another variation from the books. Book Miss Marple never worked a day in her life.  Rutherford’s Miss Marple has had many jobs. Once she reports to the house, she finds the Lord and master of the estate does not much approve of her. Again, this is a comedy.  Miss Marple is very quick with the subtle insults and sarcasm as she finally solves the crime. Which makes this a delightful movie. Even this trailer for the movie is done in an endearing way to include the audience in the great adventure to solve the crime.

Rutherford is an Oscar winning actress, Golden Globe winner, and has been honored by the Queen of England with the OBE(Order of the British Empire) in 1961 and the DBE (Dame Commander ) in 1967.  She has appeared in over 40 movies. Many considered her a National Treasure. I love watching her performances no matter how small or in what varied role she chose to play.  To me and to many others, she is a great actress and a according to all those who knew her, a great human being too. A more personal discussion requires a separate blog to do her any justice because her life is amazing.

This is the 5th Annual What a character Blogathon! It is hosted by: Paula’s Cinema Club; Once Upon A Screen; and Outspoken and Freckled.  I am very happy to contribute a post about one of my favorite character actors: Margaret Rutherford.

You can read more posts about other wonderful characters actors using the following links:

This is a text widget. The Text Widget allows you to add text or HTML to your sidebar. You can use a text widget to display text, links, images, HTML, or a combination of these. Edit them in the Widget section of the Customizer.
Loading Comments...
Comment
×